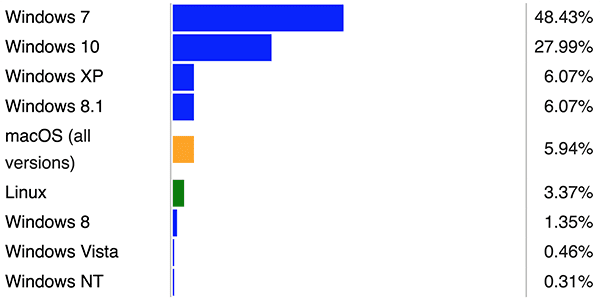 There are multiple ways the bypass security products. SpookFlare has a different perspective to bypass security measures and it gives you the opportunity to bypass the endpoint countermeasures at the client-side detection and network-side detection. SpookFlare is a loader generator for Meterpreter Reverse HTTP and HTTPS stages. SpookFlare has custom encrypter with string obfuscation and run-time code compilation features so you can bypass the countermeasures of the target systems like a boss until they “learn” the technique and behavior of SpookFlare payloads.

You can find the technical details of SpookFlare following headings and the payload execution steps following graph. 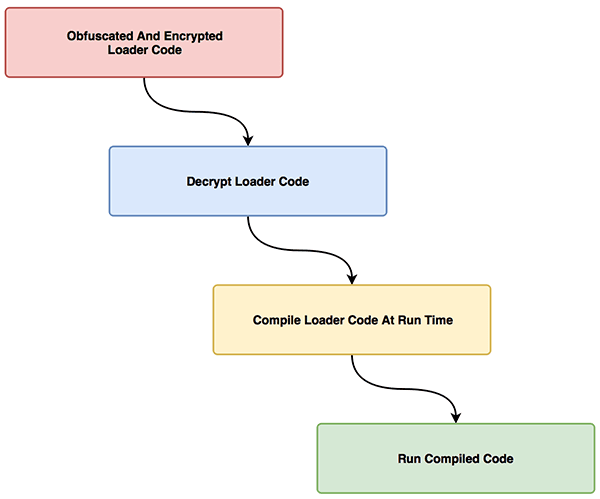 In software development, obfuscation is the deliberate act of creating source or machine code that is difficult for humans to understand. SpookFlare uses the obfuscation for the string names. Therefore, it will be difficult to develop a signature in a certain “string(s)”. Actually writing a signature for certain string is a behavior done by many malware-analysts or security product developers. When a malware analyst analyzes the sample or by dynamic analysis systems then, once it is determined to be a malware, a proper signature of the file is extracted and added to the signatures database of the AV or Endpoint Security product. The signature of the file will change if you change any byte in a file. If you change the correct bytes, you can bypass the signature-based detections. SpookFlare uses the string obfuscation. Therefore, each generated payload will be unique as possible.

Even though the application is built using obfuscation, the code must be completely changed after a point and this point is when your payloads are detected as malicious because string-based obfuscation can achieve success in a certain extent. For example, if the string-based obfuscation is used in your payload also the OpenProcess, VirtualAlloc etc. system calls are used in your payload, there is a possibility of your payload detect by security products. That system calls are suspicious because so many malware use that system calls. To escape from these and other situations, SpookFlare compiles the actual code during runtime. Thus, the definition of suspicious defines like system calls is hidden. Like the system calls, the actual code hiding is explained under the ongoing heading.

The .NET Framework includes a mechanism called the Code Document Object Model (CodeDOM) that enables developers of programs that emit source code to generate source code in multiple programming languages at run time, based on a single model that represents the code to render. Sometimes developers need it, and .NET Framework makes it possible. For example, the following C # code compiles the C # code assigned to the “code” variable during execution and runs it.

So far we have learned that we can use the string-based obfuscation and compile the code at runtime. However, when doing all of this we need to hide code the actual loader. Because the loader code being moved will have a disadvantage against signature-based fixes when the loader code defined clear-text. So SpookFlare encrypts the original loader’s code using the RijnDaelManaged class and when executed it decrypts the loader code after then it give the code to the compiler. It is act like crypters and finally, it execute the compiled code.

So, how can they detect the malicious files at the right network level? The answer is signature-based detection. For this situation you can use an encoder for Meterpreter’s core (stage) and you can bypass the network-level countermeasures. It can be the first conceivable idea and makes sense. If you use an encoder, you need to add a stub to decode it and creation of a signature for decoder is easier for malware analysts. We need something different and more difficult to analyze or detect. SpookFlare can handle this better without any encoder.

How do malware analysts write signatures for a binary? By creating unique patterns and creating these patterns for the head of the file. I mean, malware analysts are creating signatures for the header part of the file. Thus, they can prevent false-positives and detect malicious files more easily. So here is the solution or SpookFlare offer; if we add random bytes at the beginning of the application we can bypass network-based countermeasures and for this solution we need to patch Metasploit. 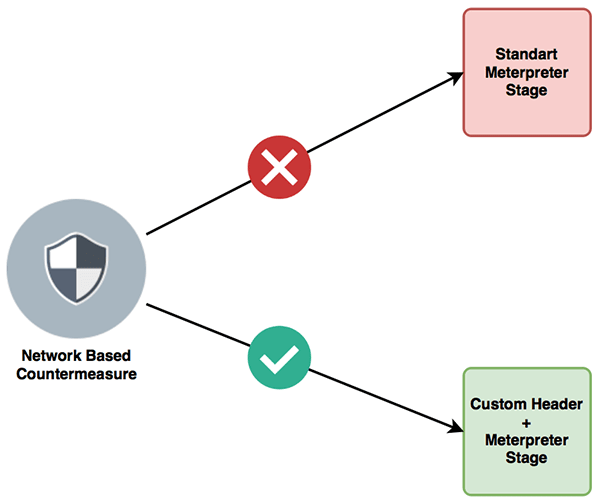 After, we define the creation of the actual Stage with generated random bytes. The screenshot of this process is given below. 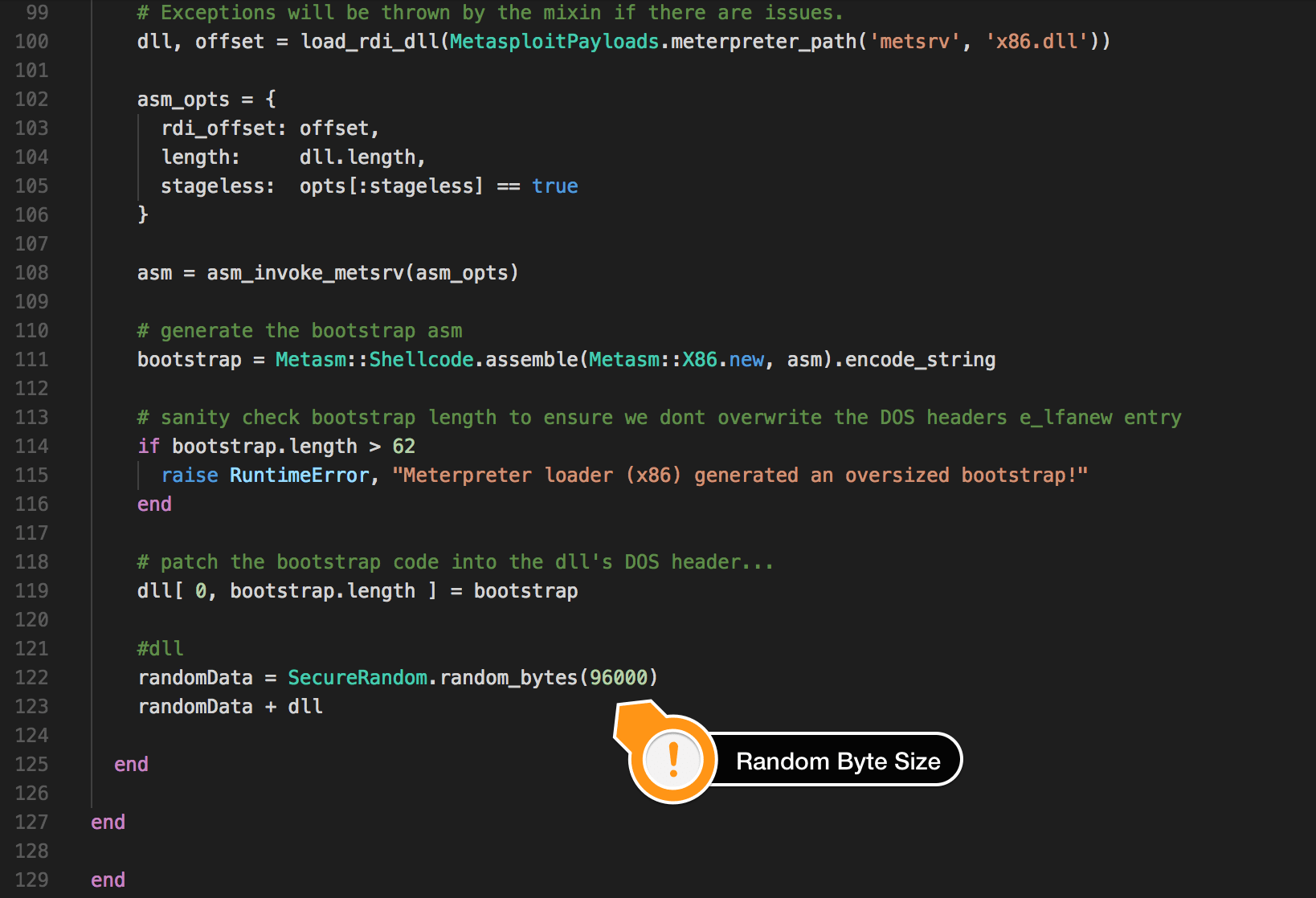 The scan results of SpookFlare loader, standard and patched Meterpreter stages are given below. 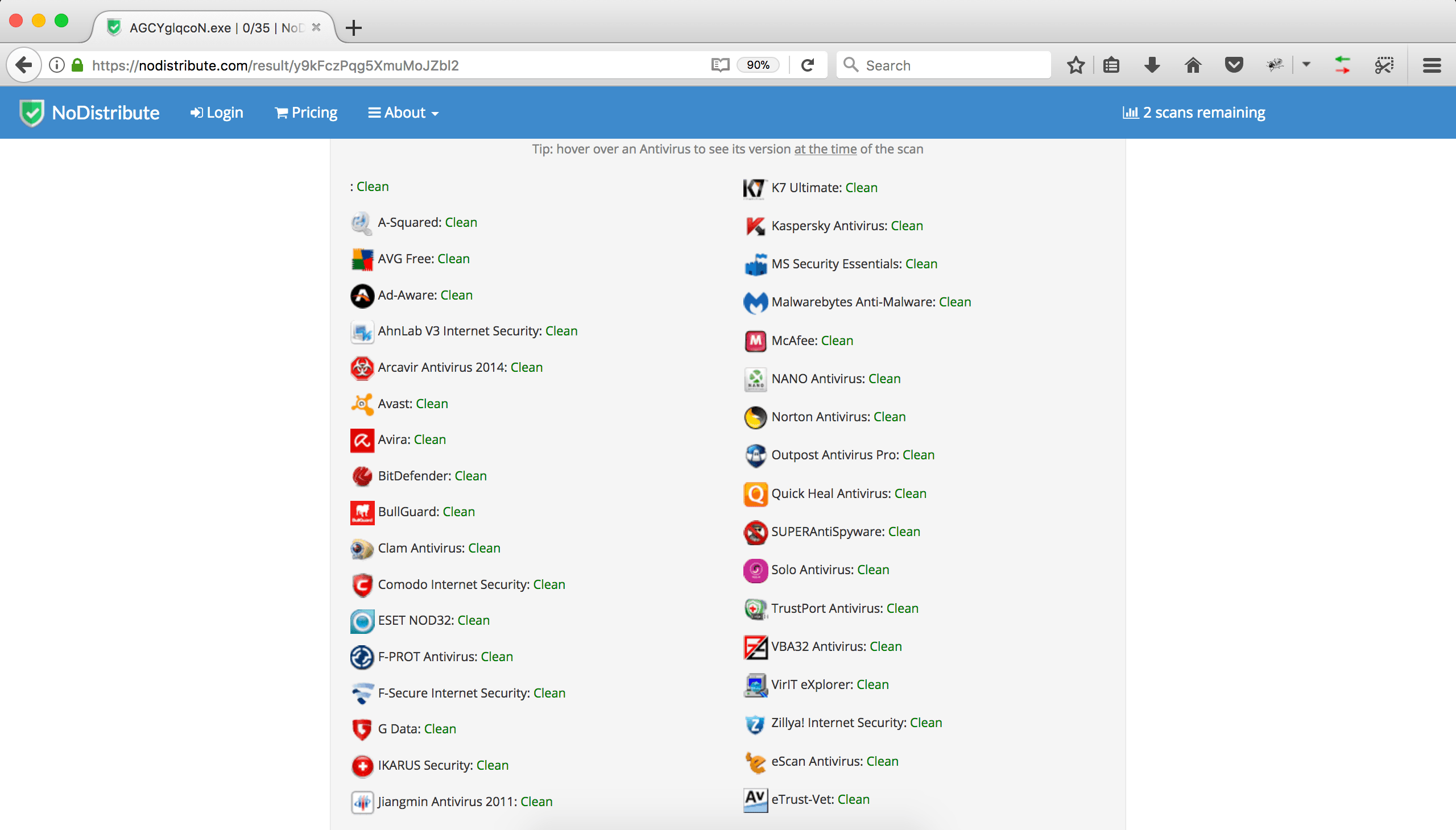 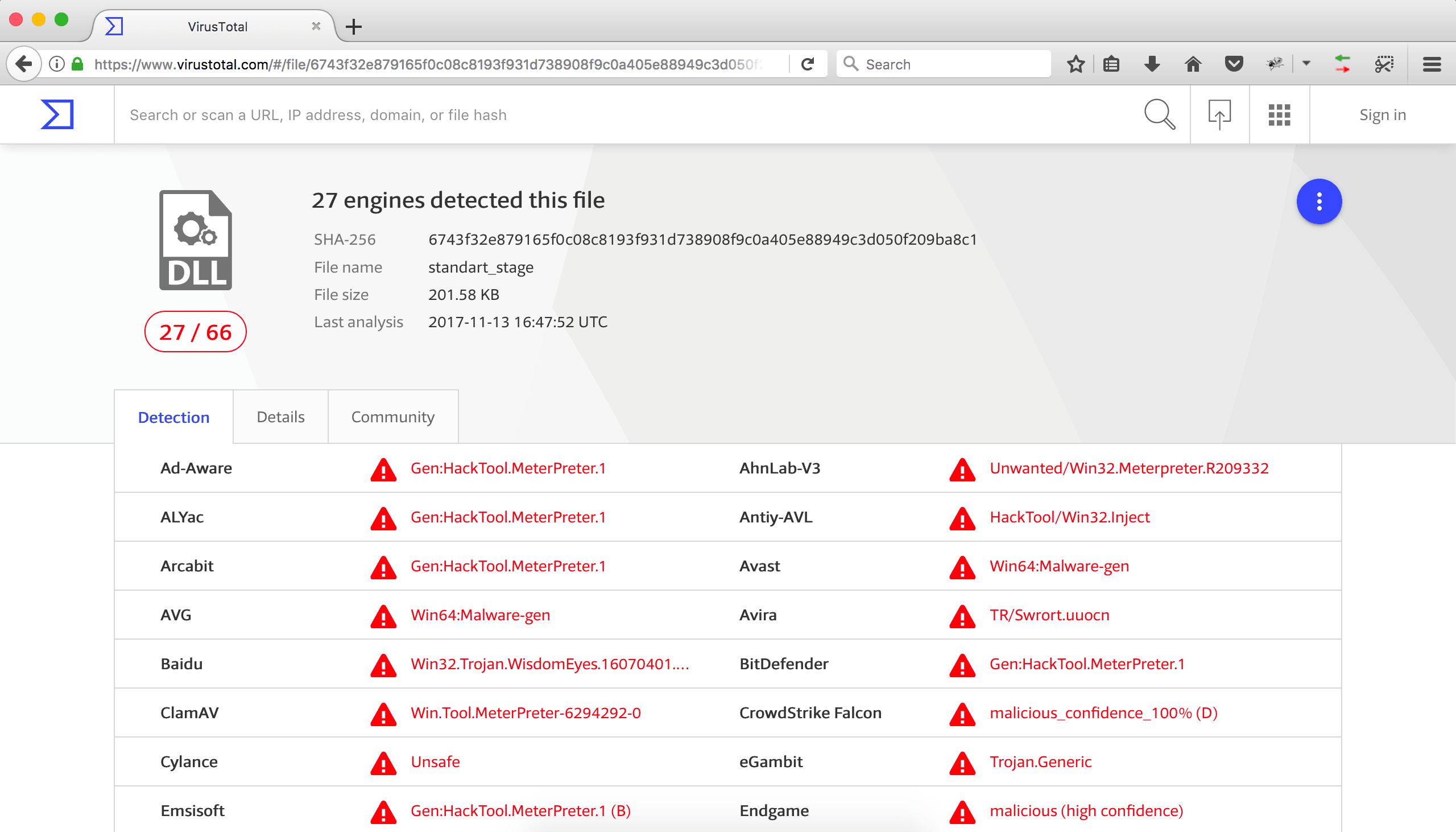 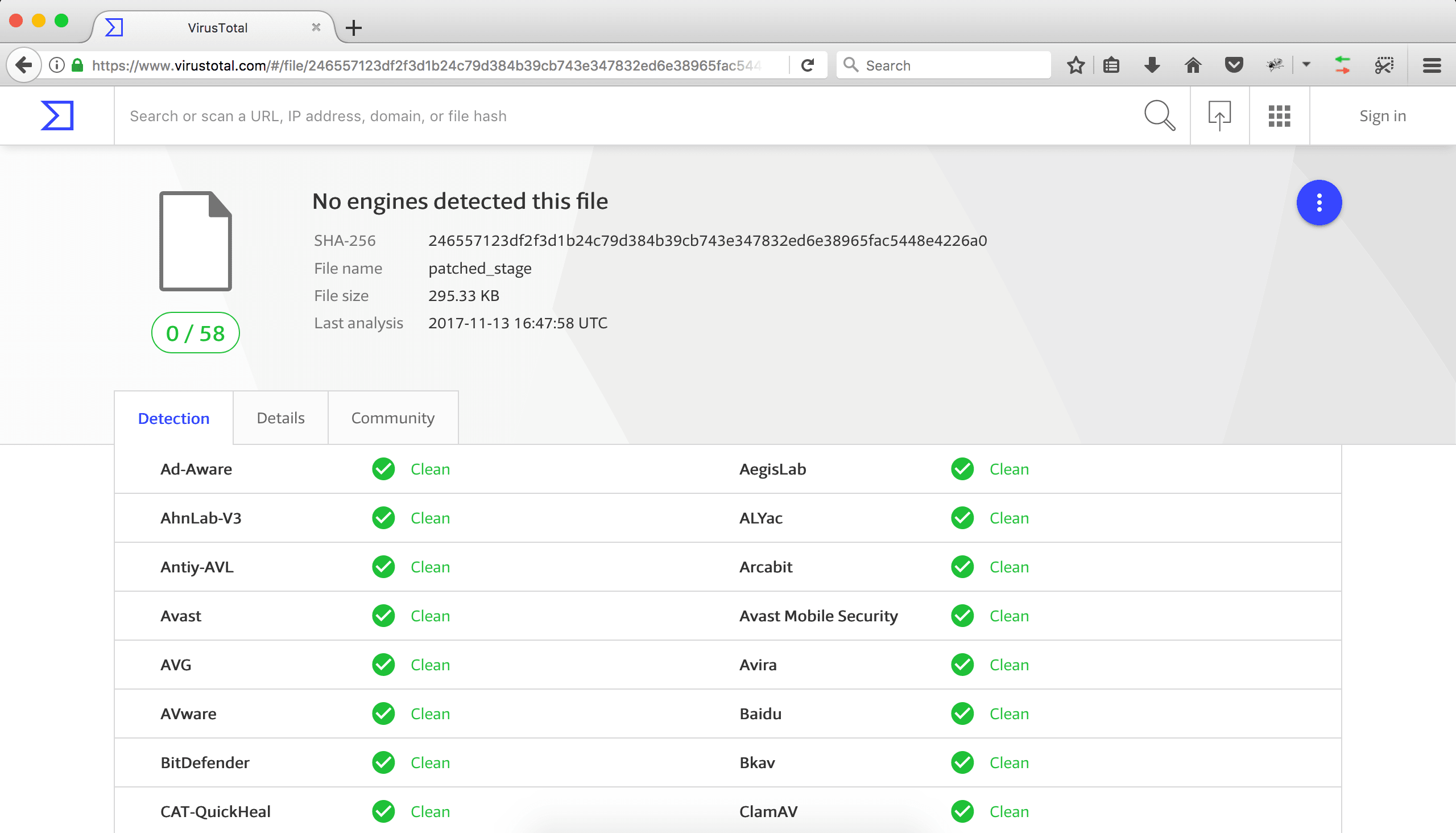 As you know the security product firms can generate unique signatures of SpookFlare or behavioral algorithms when the usage rate of SpookFlare increases. When this happens, it will be time to change signatures and behavior. I/We will change signatures and behavior, or I/We will develop entirely new techniques. At the end of the day we will bypass the measures again in a very high probability because this is a cat mouse game that has no end. :) I developed the SpookFlare and technique for use in penetration tests, red team engagements and it is purely educational. Please use with responsibility.

In the above sections, I tried to explain as much as possible how SpookFlare works. You can access the usage video and the project on Github below links.